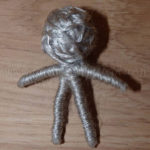 No, there’s no wire… 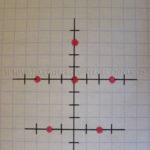 Plant nails on each red dot.
Do not plant them to much, you will have to take off 2 or 3.

WARNING : the doll is all done with only one thread, do not cut it until the end. 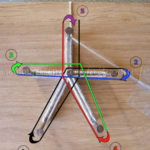 Take back the unuse thread and turn around the central nail weaving on and under parts of the skeleton.
Make a double knot with this thread and the ball of wool (don’t cut it !). 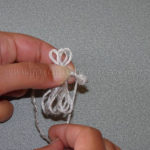 Take off 3 nails to release the skeleton.

From now on, you will have to pull the thread until the end (to obtain a stiff doll).

Turn aroud the arm and return (stop 1mm before the end of the arm).
Take care not to overlap the thread. 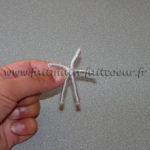 Do the same for the other arm, the two leggs and the head.
(After each limb the thread is near the “navel”). 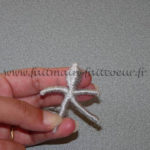 Turn around the head to obtain a shape of olive. 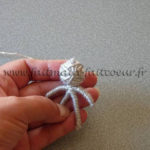 Turn around this “olive” as you make a ball of wool.

Keep pulling the thread, otherwise your doll will loose its head…

At the end, turn twice around the neck.
You can cut the thread !!
With a wool needle, slide the thread through the head. 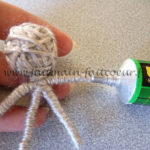 Put some glue at the end of arms and leggs.

Coming soon, clothes for the doll. 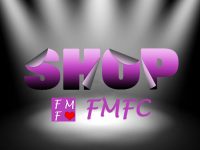 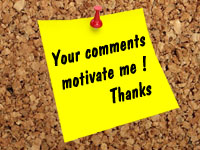