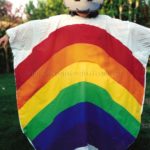 The year before, I made a ghost costume for my son.
I’ve kept the body on which I sew the rainbow colors.
The mask is a piece of cardboard on which I sew grey felt. 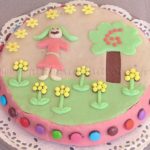 The advantage of decorating a cake with almond paste is that children who don’t like the taste can take it off .
They like pecking sugar balls or smarties (which help to cut the cake in equal shares). 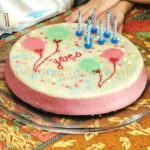 I loved the pastel sugar confettis. 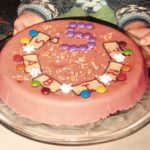 Almond paste and some smarties. 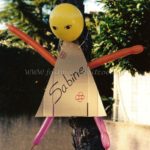 A piece of cardboard, 4 tube balloons, 1 classic balloon.
After her birthday party, my daughter kept it one month in her room. 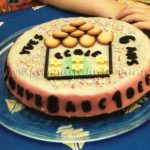 The first one of a (very ) long run of decorated cakes with almond paste.

In that time I found moldings alphabet and numbers in chocolate (I wish I kept those molds).

Handmade/Heartmade by my mom.
She took rompers (that she had knit for my son).

My daughter was enthralled by this doll as tall as her.
For a long time « big doll » took away nightmare from my daughter (as she took its « hand » she thought she was not alone in her bed).

Thank mom, she is wonderfull and avoided us a lot of night-awakenings. 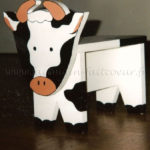 When my daughter was born, she too had her bench.
This one is a little higher. As we can’t transform the bathroom in a menagerie, “piggy” went to their room. 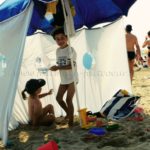 Never say it too much : sun is dangerous for kids.

Parachute fabric (or nylon), tulle and little snap hooks.
Some funny forms (fish, star and boat) and portholes in wich I cut the nylon to let the wind going through. 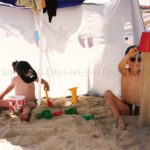 Due to nylon, once folded the screen weighs nothing and doesn’t take up space. 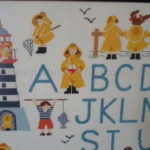 My son has a brittany name, however it’s my daughter who had the oilskin jacket’s kids. 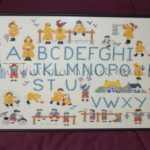 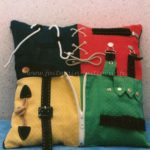 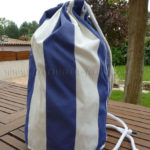 A bag very useful to take children to the beach and which is still useful when they (too much) grew.
The inside is a round bag.
The outside has many pockets and (with clever zippers) can get loose in order to make a changing mat. 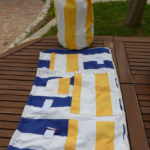 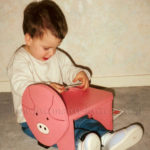 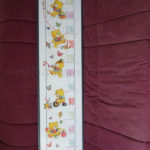 I was stitching it when I had to go to the maternity hospital. 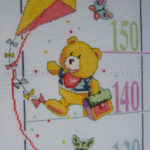 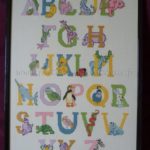 An english alphabet while I am french : I could have had dyslexic children.
My first large cross stitch work.